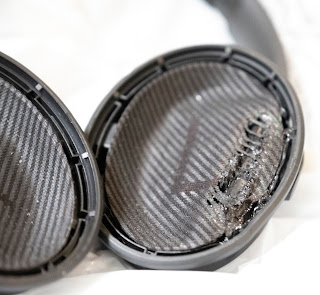 About me: I'm a software engineer with one of the FANGs. I've been in the industry for 20 years.
I have been a fan of Bose's noise cancelling headphones for about a decade. I have recommended them to developers I work with. They're great for conference calls. Occasionally you have the teammate without an optimal AV setup for conference calls where everytime they speak there's an echo, and I'd be like, "psst... get a pair of these, the mic quality is great and they're portable." I knew a lot of people who grabbed a pair.
About three months ago, I switched from a wired pair to a QC-35 II model. They were purchased direct from Bose's website. I bought them in 2020. I had used them occasionally for travel, but I decided to switch over for day-to-day work after a round of home office equipment upgrades. They were kept in my office. They were never exposed to any extreme temperature variations. I used the stock USB charger connected to a Macbook Pro. Like most experienced software developers, I find myself on a fair number of conference calls per day.
I was oncall this week. Our deployment pipelines had backlogged because of the Log4J debacle. It was a busy week of conference calls.
On Dec 15th I was prepping to join a conference call, I took them off of my charger, put them on my head, and noticed they were suddenly getting very warm. I started to smell something funky. I pull them off and suddenly toxic white smoke and immense heat emerged from them. I quickly ran to my front door and tossed them out of my house. They smoldered for 10-15 minutes. A toxic chemical smell persisted and is still noticeable in my front yard. (Later, when filing the support request to Bose, I peeled the earcups off to look for the serial number in case you're wondering.) 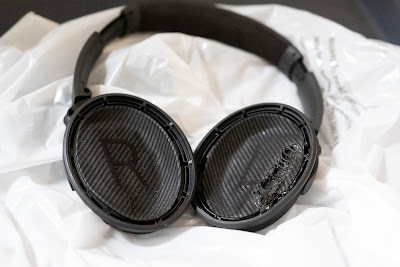 I noticed a sticky sensation on my hands and arms. It burned. I tried to wash it off as best as I could. The burn seemingly wasn't too serious at first. It's Friday now. The burning is worse. I went to urgent care this morning and it's been diagnosed as a chemical burn. The doctors tell me to watch out for nerve damage. I have follow-up appointments set up for later.
I'm not sure I'll ever want to use wireless headphones after this. It could have been a lot worse. It could have burned down my house. They could have been on my head when the runaway thermal reaction occurred. I have no idea how much heavy metals I've been exposed to by inhaling the toxic smoke. I don't know how much smoke my pregnant wife inhaled. I worry how much chemical residue is on my desk, floor, walls, how much is getting recycled by my HVAC system, how much exposure my pets had.
My initial interaction with Bose support: 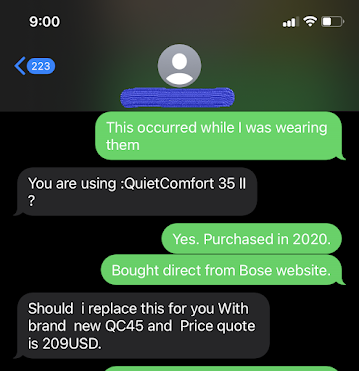 Afterwards, after escalation with a different team, they offered me a pair of the QC-45's for no cost. I don't think I want one. I'm re-evaluating the use of personal devices with rechargeable batteries in my life. I just want the pain to stop.
(UPDATE: These sorts of issues with companies take a while to resolve. Bose has been perfectly reasonable once I got through the initial support channels, but we're only into day 3 and these issues take a while to work out. I have made reports with them and the CPSC. I did however want to note my experience with this product as I've previously recommended them to many people and highlight my experience.)